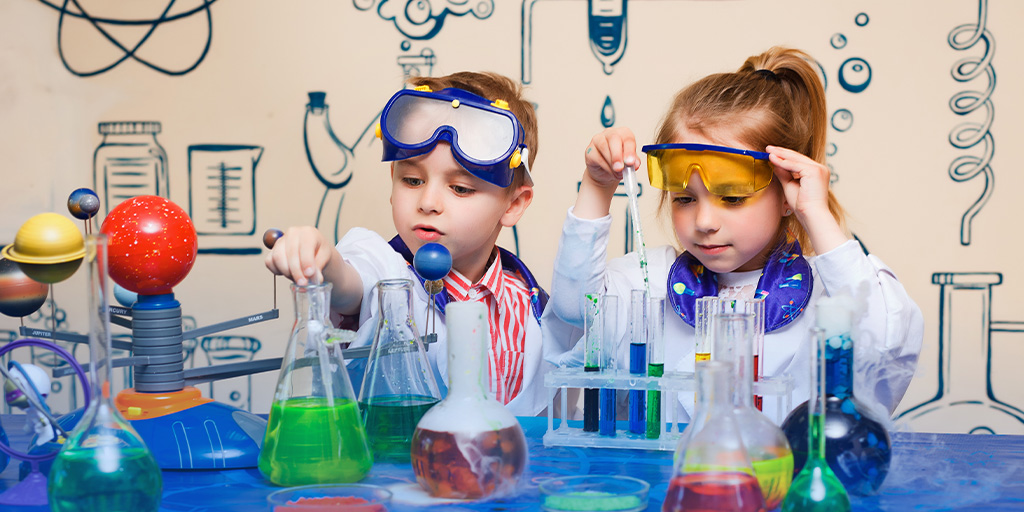 The world of science is about investigation, observation, and wondrous discovery. It’s exactly these kinds of learning experiences our modern students crave.

As teachers, we can ensure science remains an exciting and often magical subject for our learners. There’s no better way to do this than with simple but highly creative inquiry-based learning science activities that challenge and inspire enriching learning.

The 10 activities provided below use the familiar processes or objects we encounter every day. Experimenting with them will help your curious young learners discover the why's and how's of life. Also included are some related videos for sharing that your students will love, and that will help you delve into deeper instruction with these cool inquiry-based learning science activities.

Talk to your students about the chemical bonds (covalent and hydrogen) that hold water molecules together. Explain how those bonds stretch out when water freezes so that ice becomes less dense than liquid water. Give your students an opportunity to come up with ways they can watch this property of water in action. Ideas include:

Here are some more ice experiments from Best of Orlando that kids will love.

This is a good way to explain to your learners the importance of ice to Earth’s ecosystem. One example is that ice layers actually keep fish—along with other water-dwelling organisms—warm in their habitats during the winter months. For a deeper challenge, guide your learners to talk about what they think would happen to our marine life if it was not protected by those “insulating” ice layers year after year.

Provide students with a basic definition of force and mass and discuss how those two factors work together to create acceleration. Help them understand the acceleration of an object depends on how much force is exerted, as well as the mass of the object. Explain that you must exert more force on an object with a lot of mass than you would on an object with less mass.

Allow your students to experiment with this by providing objects they can compare as they exert force. These objects can include:

An experiment like this can lead to an awareness of just how important understanding force and mass has been to human life. After all, they can be discovered in so many instances of our everyday lives. For example, without an understanding of either of these concepts, we would never have been able to build anything and would have none of the inventions that have enhanced our lives. See how many real-life examples your learners can find of force and mass in action.

If possible, take your students on a walk around the school grounds and have them observe the leaves they see on different plant and tree species. (If leaving your classroom isn’t possible, bring a selection of leaves for them to observe.) Have your students make sketches of the different leaf shapes and record any observations or questions. Discuss how leaves make the energy for the rest of the plant or tree by collecting energy from sunlight and converting it to food (photosynthesis).

Then ask your students to hypothesize about why leaves from different plant species aren’t exactly alike even though they perform the same function. Their thoughts may include:

After exploring this idea, lead your learners into a discussion of how photosynthesis supports human life. During photosynthesis, light energy is used by foliage to change water and carbon dioxide into the oxygen and compounds we need to survive. How much of our planet’s greenery is being threatened by industry and global warming? How will this impact life on Earth in the years to come unless we do something about it?

Have your students compare their physical features with those of a sibling or close relative. Ask your students why siblings don’t look exactly alike (except for identical twins) when they came from the same parent or parents. Explain that children receive genetic information from both their mother and father, but that the information comes in different combinations in each child they have. To provide an example:

Explain that even though the exact same blocks were in the bag both times, they came out in a different combination each time. Tell them this is what happens with genetic information and why they don’t look exactly like the members of their family.

Provide students with a brief list of species that often are confused for one another. For example:

The video below contains even more ideas, plus some fascinating information on world species in general that will blow your learners’ minds.

Have students record what they think they know about each pair, including how they’re alike and how they’re different. Then provide a variety of images for each pair. Ask students to study the pictures to determine if any of the facts they listed were accurate. Then point out how each animal in a pair is unique from the other and discuss how the environments, eating habits, and food of each are also unique. Challenge students to correctly identify each of these species when they encounter one.

Ask students to identify some of the colors they see around them. What allows us to see those colors? What makes something red? Why is red different from blue? Have students present their hypotheses.

Now explain to students that different colors are a result of different wavelengths of light. For example, red has a longer wavelength while violet has a shorter one.

Next, teach your students we see one color because it is the wavelength being reflected, while all the other color wavelengths are being absorbed. In other words, we see green in grass because it is the only color wavelength that is being reflected while all the others are being absorbed. You can allow students to go on a walk around the school grounds in search of anything in nature that has more than one visible color. Good examples include:

Color theory is another fascinating subject to explore with your learners. According to Color Matters, “color can sway thinking, change actions, and cause reactions. It can irritate or soothe your eyes, raise your blood pressure or suppress your appetite. When used in the right ways, color can even save on energy consumption.”

Help your learners understand that using color properly is also a big part of how we communicate since it’s used extensively in art, design, and the marketing of all the products we consume.

Ask your students to tell you about some of the dinosaurs that starred in any of the Jurassic Park or Jurassic World movies. Compile a list of the characteristics the organisms displayed on screen. Next, give your students access to a safe search engine or to accurate dinosaur fact books. Have them compare the true characteristics of each species with the ones portrayed on film. Your students should discuss questions such as:

Some of the best dinosaurs to use for this activity include:

Dinosaurs are a fascinating subject that enraptures the imaginations of learners both young and old. Beyond this, though, dinosaurs are a great way to introduce kids to other scientific subjects of importance. In the Guardian article Why Dinosaurs Are Important, Dr. David Hone writes:

"Few kids will (I suspect) willingly pick up a book on geology … but most will probably own a dinosaur book or two at some point … most of the better ones (even those aimed at younger readers) cover at least a little of how fossils are formed, different rock formations, the age of the Earth and the like, and thus they will be presented with at least a little geological information and there will likely also be parts on relationships between groups and changes over time thus introducing ideas about evolution, taxonomy and extinction."

If possible, take your class on a walk around the school grounds and have them sketch as many different bird species as they can see. You can also provide detailed images of the bird species that live in your area. Ask the students how so many kinds of birds can all live in the same place without running out of food or places to build their nests. Have students record their hypotheses.

Provide your students with access to a safe search engine or to reference books so they can look up information such as diet, types of predators, and nest-building habits. Then have your students compare the information they gathered for each type of bird. What do they see that’s different? You can explain how animals live in different niches within a habitat where they use different resources. This prevents them from running out of food and space even though they all live in the same area.

Give each of your students a penny and a small cup of water. Tell the class they will be putting as many drops of water as possible onto the penny before the water spills off. Have them record how many drops they think it will take before this happens. Show your students how to let a drop of water roll off their finger and onto the penny. Have them repeat this process, counting the drops each time, until the water spills off the penny.

Ask the students if they were surprised at how many drops actually fit. Then explain to your class that hydrogen bonds between water molecules help the molecules hold on to one another. This lets them form a dome over the top of the penny instead of spilling off after just a few drops.

Inquiry-based learning science activities that explore the properties of matter are many. It’s an important subject since everything is made up of matter. Knowing its various characteristics helps us to make proper calculations and better predictions when conducting experiments.

This activity will have your kids using their senses in an interactive way. It requires 5 plastic bottles and 5 clear liquids, such as:

Fill each plastic bottle with the same amount of a different liquid and put on the lid. Number the bottles 1-5 without any other clues about the contents. Do not tell your students which liquids you have used.

Have your students number their papers from 1-5 and tell them their job is to identify the liquids that are in each bottle. They can gently shake or roll the bottles and they can take the top off to smell but not taste the contents. Have them record their hypotheses about which liquids are in each bottle. They can then discuss their hypotheses and explain the methods they used to determine each one. You can reveal the true contents of each bottle at the end of the activity.

If you're looking for some science videos to flip your STEM classroom with, there's a whole world..

When we talk about inquiry-based learning, we’re talking about possibility. Given the right..

The Real Purpose of Inquiry-Based Learning and Why it Matters

When you decided to enter the world of education, you more than likely did so because you sincerely..